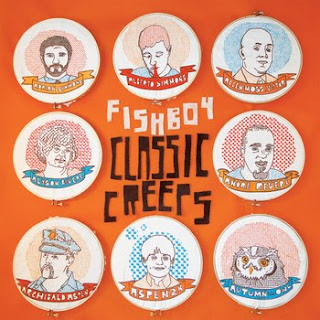 The new (well forthcoming) album by Fishboy, Classic Creeps, is awesome. It's as simple as that.

It's a concept album in the fact that there are a bunch of songs each pertaining to a different character (whose name begins with A), and that over the course of the album the disapparate strands of each characters stories are interwoven to produce an over arching narrative. It's an interesting idea. I can't think of too many similar ideas, I suppose Saint Etienne's 'Tales From Turnpike House' had some similar conceits, but that was more about invidual tales from people living in the same complex, whereas this ties all the stories together.

If that was the extent of the album though, simply it's cleverness then it would be nothing more than a slight distraction, something to mention to a friend in an "oh that's interesting" way and then forget about. The thing however is that it's also a fantastic pop/powerpop/indie pop record. It bounces, it jangles. It has french horn smeared all over and yet with a liberal touch. 'Alberto Simmons' alone is one of the best pop songs I've heard in years, but the whole record is crammed to the vinyl grooves with singalong, smile along, tunes.

The record is being released by Happy Happy Birthday to me records, who are doing some pretty interesting packages for this.


If that wasn't enough (and I should think that the offer of 9 seperate badges, a poster and a vinyl what satisfy even the biggest music and memorabilia and nice things glutton) there's a whole comic, included in the record too I think, telling the story of the record. You can find that on the Classic Creeps website

Oh and of course the important bit, you can stream the record on bandcamp.

Fishboy really should be applauded for the time and efford they've put in, to produce something which is both and intelligent and well though out piece of work which is also a brilliant and downright enjoyable album.
Posted by damian at 11:45 No comments: 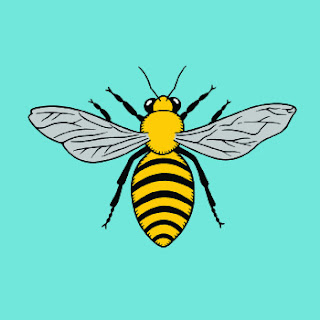 Slow to the party on this perhaps, but I just wanted to post quickly about the new(or newish at least) songs by Help Stamp Out Loneliness up on Bandcamp; a website which is quickly becoming a must-go to.

I liked the Language Of Flowers (the band some of HSOL) were in before, and I liked the little I'd heard from them before, but the 3 songs presented on Bandcamp from the upcoming album are all kinds of excellence. I could easily wax lyrical about all of them, but I think I'd pick track 3 'Record Shop' as a personal favourite.

It's all good though, harmonies, jangling and quite a large element of motorik thrown in for good measure. I don't really need to say more than that, except that if the whole album is as good as the first 3 songs presented there, then we're in for something special indeed. Oh and loving that artwork. See back at the top.


Oh yeah, this is the band camp link
Posted by damian at 18:41 No comments:

Sensation In The Dark

I've been listening to the new Gruff Rhys album this morning; it's very good. A lot closer to his previous effort 'Candylion' then to the Super Furry Animals. Or at least the more proggy, psychedelic SFA offerings. It keeps that same melodic, laid back groove as Candylion did and it's all the better for it.

What moved me to make this post though is the excellent single off of the record, 'Sensations In The Dark' It's so good, check out those horns! It's got to be one of the best singles I've heard so far this year. Loving it. You can see the video below.

Sorry about the shortness of the post, I'll try and post again later.
Posted by damian at 11:34 No comments:

In lieu of a post about a band today, I'd like to alert you to a worthy cause.

Phil Wilson, formerly of The June Brides and maker of fine solo records - you should go here is trying to raise a bit of cash to take him and his band to America.

It's always sad to see someone having to sell some great records, and it's somehow even sadder when it's to take a band to America when by rights they should be having it paid by some major label. Phil has given the world some awesome music, so it'd be nice to give something back. Just have a look at his ebay list if nothing else, there's some really nice stuff on there.

The new PJ Harvey album, 'Let England Shake', is streaming at the moment on NPR (who have had some great first listen albums recently). It's an angry, politicised album aimed at England but with one doomy eye gazing at the rest of the world too. It's all PJ but there's hints of Joanna Newsome here and Kate Bush there. Though to be fair I might just be causally relating Bush and Harvey there because of PJ's 'England' and Kate's 'Oh England My Lionheart', but there's a definite atmospheric feel about this record that recalls some of Kate Bush's finer work.

The music itself sounds as good as anything I've heard from Polly Harvey in ages, the brass works really well, there's a couple of samples dotted about, the whole thing hangs together extremely well. It's full of autoharp and it's definitely pervaded (as said) by an atmosphere, a sense of old Englishness which fits the theme of the record well.

I'm loathe to say more about it until I've listened to it properly, but a preliminary listen makes me think this is going to be one of those records that gets raved about in the press. It does sound excellent on a first run through. We shall see.

You can listen to the record streaming now on NPR. Also Harvey is doing a video for every track on the album. So far there's two

The Words That Maketh Murder

Best of the month.

Ok I've just made a new spotify playlist I thought I'd share with you lot, it's only short (8 songs) but it's just some of the tracks I've enjoyed from (what I would consider) the best records of the last month, up to and including today as represented by the Cut Copy song. Like I say it's not long but I think 8 really good records in a month is actually pretty good going and they're varied too, from the garage rock of The Parting Gifts through to the dreampop of Minks. There's no rhyme or reason to the running order I've just whacked things on there. The link is below.

Apologies if you don't have spotify I tried to find links to all these songs elsewhere online but couldn't but if you want to try and at least listen to some of them I've put the tracklisting below.

Labels: best of the month, Spotify 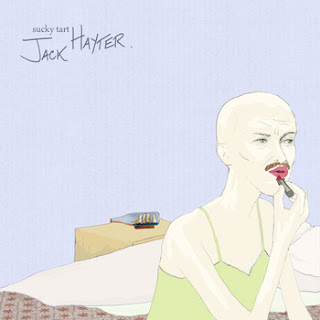 I suspect most of the readers of this blog are familiar with the work of the mighty Hefner, and if not you really should be, but maybe so much with the work of Jack Hayter, Hefner's multi instrumentalist. I wasn't I must admit. Though I was aware that he was in a band called Dollboy I hadn't realised he'd released anything solo (I'm a bit slow), which in a roundabout way leads me to tell you about 'Sucky Tart' the new EP.

At it's heart it's folk music, first track 'I stole the cutty sark' unsuprisingly is as close to sea shanty as you're going to get without running around with an eye patch and a bottle of rum. Hayter's voice might take a little getting used to (I never thought he could sing and maybe he can't, but here he sounds like a possessed beaten down old pirate captain and it works), but once he (and the song) get going it's a very enjoyable slab of maritimey goodness. It clearly doesn't take itself too seriously and it's all the better for it. It's catchy too.

Of the other tracks 'Dolls House' is slightly rendolent of the Pogues, slightly keeling but not quite crashing and falling apart, whilst 'A Simple Song' is woozy in the best possible way.

Last track 'Jacquie I won't mind' rounds the whole thing off nicely, it's lovely. It has a whimsical, sad and touching feel to it that once again reminds me of the more introspective moments of The Pogues, but perhaps Tom Waits too (around Rain Dogs).

What we have here really is an excellent piece of work. Because of the qualities of Jack Hayter's voice this collection has a real downtrodden, world weary feel to it; it washes over in the most melancholic way, and yet does it without ever feeling to sad. Heart and melody. What more do you want?

You can listen to the entire thing on Bandcamp or you can download it for quite ridiculous price of £1.79. Alternatively buy the CD for £3.99. Or do both.
Posted by damian at 11:40 No comments: