Hello; it's been awhile hasn't it? Put that down to a general malaise caused by joblessness (why is it that when one has nothing but spare time there seems to be no desire to use it), afternoon drinking and too much gaming and lets move on.

It's the curse that when you don't do something things that need your attention start to crop up all over the place. Normally the Beerandbands email is as barren as a nun but this month I seem to have recieved some actual stuff from bands and labels, so rather then waste their effort in contacting me I thought I'd better get round to actually reviewing some of this stuff. 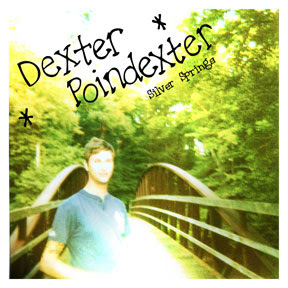 So today it's an FREE EP from February Records called Silver Spings by Dexter Poindexter. Dexter Poindexter is one man from Chicago named Tommy Komorowski, apart from this EP he's also released one with Weepop and their's a forthcoming album on Series Two records (who have released some splendid stuff in the past); a strong pedigree indeed, and one which is clearly evident on listening to the EP itself. I've heard it 3 times in succession and already the songs are stuck in my head.

First song 'Two Cracked Heels and a Ghost' sounds ever so slightly like Bright Eyes in the verse (no bad thing at all) before hitting a chorus that's insanely hummable. It sounds instantly like you've heard it before, even though you know you haven't a sure sign of absolutely quality. There's such a giddy joy to it that I defy any lover of good pop music not to take it to their heart. There's a lovely little rock-a-billy type breakdown here too, just for good measure.

Sandwiched in the middle of the EP is 'From The Midwest' which has a much more countrified swing to it. There's not as much of a hook to this one, but it's as enjoyable as the first one, and shows that Dexter Poindexter is capable of diversifying quite nicely.

Final song 'From The West' is probably the pick of the bunch. Again it has a slightly country feel to it, but more upbeat than the previous tune. Once again it possesses an earworm of a chorus. It rounds off the EP nicely too, and leaves me wanting to hear more.

All 3 of these songs are excellent, it's nice to see consistency in an EP, and considering Dexter Poindexter hasn't released too much stuff so for it's very confident and reassured. There are artists who've been around for years who don't make songs as catchy as this. I get the impression they're might be even better to come from him. Bottomline if you like your bands jangly, a little bit country, and full of joy and chorus that'll stay with you, then this is right up your street.

Oh yeah, you can download this (it's part of February Records free digital downloads) from February and really you should, it's not often you get music as good as this for nothing.
Posted by damian at 18:18 3 comments: