Iron and Wine - Kiss Each Other Clean. 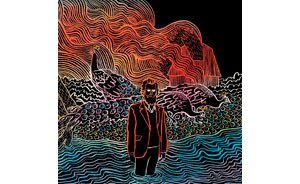 Sam Beam, the big bearded troubadour that is Iron and Wine has come a long way since 'The Creek Drank The Candle', that lo-fi, hushed whispered sound had evolved into something far more produced by the time 2007's excellent 'The Shepherd's Dog' reared it's shaggy head. 'Kiss Each Other Clean' the fourth studio proper from Iron and Wine represents another sonic leap forwards.

Lets get something straight from the off though, you might have heard doomy mentions of horns and funk (more of this later), but lets say that musical evolution is a good thing, it certainly is here, and "more produced" doesn't necessarily equate to not as good or a loss of musical intregity. Again sometimes it can but not here. This sounds like the record that Beam has been deliberately working his way towards, not just on record but in a live setting too, becoming more band orientated as time has gone on (though he is still better live on his own)

Make no mistake this is still Sam Beam, the sometimes impenetrable lyrics are still present, a tender evocative way with melody and that voice are present too , but the singing is better and the melodies far stronger. A case in point being opening track 'Walking Far From Home', which juxtaposes beautiful and distressing lyrical imagery whilst being backed by soothing vocal melody, it's a strong message of intent, but you'd be forgiven on first hearing this to imagine that beyond the production values not much has changed. You'd be wrong. There's so much going on underneath it's hard to take it in on first listen.

Second track 'Me and Lazarus' makes that clear, it is, if I may be admitted to use such a term' unrepentantly funky. Some of the vocal melody sounds like 'Islands In The Stream', there's all kinds of strange noises chittering away in the background too, and a sax, but it works. That's the thing, it WORKS and it works well. It's not just here either (there's synth everywhere!) 'Rabbit Will Run' the standout is jazzy. It's full of thumb piano, weird runs, mysterious burblings. It's inventive, it's exciting. Elsewhere 'Tree By The River' is pure joy with a smidgen of Paul Simon. There's 'Monkeys Up Town' with it's strange laid back groove or the straightforward beauty of 'Godless Brother In Love'.

It's a daring, daring record and there really is so much going on underneath that it's hard to get a handle on it. 4 listens in and I'm just hearing how it all works, it's symphonically wonderful, a real real achievement. A shame then that it's slightly let down by 'Big Burned Hand' following the song it does it's a terribly choice. A big sax cuts it and it sounds like a cheesy offcut from an even cheesier porn movie and is such a sore thumb that for a brief period after the song starts it threatens to derail the record. It doesn't though, the song settles down a bit and everything continues as before, and album closer 'Your Fake Name Is Good Enough for Me' shows that sax can work enormously well with the music Iron and Wine is doing right here.

So it's not perfect but it's close enough. The bottom line here is that Sam Beam has evolved and changed, he's not been afraid to bring in new ideas, production values and instruments. It could have been awful, that instead it is a sonic marvel whilst retaining all the quality, melody, beauty and brilliance that Iron and Wine have always had is some kind of genius.

Oh and PS, the lovely folks over at Team Coco are streaming the whole album at the moment.
Posted by damian at 16:04 No comments:

Shelflife are a record company I admire greatly (as you'll know if you have read this blog on previous occasions), I like the bands they have and I like the fact that quite often they give you something free to download and listen to at your leisure. At the moment you can download the Today E.P by a band called White Wishes.

White Wishes is mostly the work of one man who currently resides in Russia under the name Nikita Pavlov, a couple of people helped him flesh the sound out but ostensibly it's just him. Unsuprisingly perhaps given the location of the recordings, and the cover art (dead trees against a snowy white background) this is a wintry set of recordings.

Wintry though in a warm log fire and glass of wine sense rather then freezing cold hands and dying in a freezing lake kind of winter. In a way this EP shares a fair bit with yesterdays blog stars Minks. There's a similar sort of shoegaze bent to this, the same sort of glacial beauty. Here though it's less buried, and each track glistens much like the snow of the cover. 'Not Today' the 2nd track on this is probably the most straight forward, in the opening sounds there are hints of My Raining Stars, but the vocal is definitely reminiscent of some of the janglier bands of the 1980's. It's good stuff, very good stuff. 'Drops' the 3rd track is sonically much more interesting, hushed vocals and stabbing instruments against a sparse drum beat mean that it's this track that the most rendolent of the winter vibe. The final track is a pretty and touching acoustic piece, a nice way to close off.

White Wishes has produced here 4 fine pieces of music, which work together really well, but standalone just as easily. There's never any excess not to download free music, and there's even less when it's as lovely as this is. Go to the link below and do your duty, oh and while you're there why not shop the website too.

Minks - By The Hedge 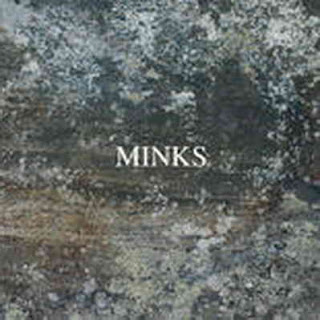 Minks record label describes them as "Like if Robert Smith gave birth to a baby, and the baby was actually a cassette of Cure demos that had a lot more staying power than actual Cure demos", elsewhere I've seen them describes as "gothic pop"; their album has songs called Funeral Song and Cemetary Rain on it. You know what to expect now, right?

Except perhaps not, because if Minks share anything with the Cure it's the 6 string jangle that permeates the album, certainly there's nothing as dark and gloomy as comparisons to the Cure might draw (and yes I know the Cure didn't just do gothy) and the vocal is not really Robert Smith either. Yeah there is darkness here, but it flits in the corners, kept at bay by the warmth of the music. To draw a poorly defined metaphor, the music is akin to the weak light after a rain shower, rather then the promise of rain itself. Beyond that if comparisons can be drawn to bands of the past it's more likely to be New Order or My Bloody Valentine. There are echoes of Shields sonic cathedral here (but more a sonic cottage perhaps), elements of shoegaze and shimmer give the songs a rare beauty.

Yet there's more than that, the band have been called indiepop too, and yeah you can draw a line between Minks and their label mates Wild Nothing, but in the fuzz and brittle jangle there's the sound of The Pains At Being Pure at Heart too; cf 'Cemetary Rain'. You might want to mention The Clientele when drawing comparisons too. For me though, the sound they make is akin to Sarah records indiepop, in the jangle and the spaces between songs you can hear The Fieldmice or Another Sunny Day, not in terms of lyrics, but in terms of FEEL, the best Sarah records were evocative, rendolent of a moment, a thought, a soft hand on a cold evening. Minks have that, it's one of the things that makes them special.

By now perhaps, you get the sense that Minks are hard to pin down, that or they're just an amalgamation of influences and nothing more; not true. They take these elements and twist them, knowing when to sound like one thing, when another, and yet create something new from the bare bones. Perhaps it's by design, perhaps it's luck, but by creating a record that sounds like it could have been made 20 years ago and that also fits in with the music scene right now, Minks have managed to make an album that at once sounds timeless. It's an impressive thing to pull off with a debut record.

It's impossible really to convey the record through words (as it is with almost any piece of music) so I'd encourage you to listen to the record. It's on spotify if you have the capabilities to listen there. Otherwise you can give them a listen on their myspace page Or there's some links below.

Minks - Ophelia
Posted by damian at 11:25 No comments: