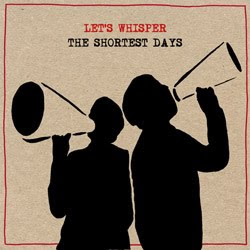 Let's Whisper are Dana and Colin who also play with The Smittens. You may have heard of them. This is a whole other project though, not a side project and something they've been doing together since 2003. You might have even been lucky enough to catch them at Indietracks in a small train carriage. They have a their first record coming out in April - it's called The Shortest Days

This record finds the two of them trading songs, and vocals, ideas and words. It works tremendously well too( more of that in a moment). It's being released by Weepop, one of the few records labels that you can place utter trust in, in the knowledge that even if you buy something from them without ever hearing it it will be brilliant; oh and lovingly packaged. It's not just the band's first album, this is Weepop's first ever full-length album release too, and it's a cracker.

The album opens with 'California Girls', a song that may be familiar to some of you. It's immediately accessible. Jangly, with fine harmonies on the chorus and a nod to the Beach Boys for extra points. Fine opener.

'All Happy Endings' follows that - Colin sings and it's slightly faster. Again there's lovely harmonies but I won't need to keep telling you that, it's something that's there on everything. There's a definite dreamy element to it too, especially on the bit that quotes Willow by the field mice. It's instantly hummable and happy; the lyrics "Feel so happy I should be dancing" emphasising that.

Evy and Sarah drifts by with a "do, do, do" refrain, wrapped in melancholy. Whilst Heart On My Mirror carries the slight feel of melancholia through accompanied by a gorgeous guitar line.

It continues in this vein, 'Jackpot' is soft and tender, 'Meet Me On The Dancefloor' sounds like a future crowd pleaser. '2 hours' is beautiful, 'Let's Pretend' is endearingly touching.

Later there's 'Shortest Days' which sounds (to me at least) like The Sundays; certainly in the guitar lines. A splendid instrumental 'when the snow falls' and, of course, 'Let's Whisper' which is just fantastic.

This is such a pleasurable album, it really is. Dana and Colin manage to combine to create something lovely. Dana (it says here) is responsible for the tender, raw songs and Colin for the more upbeat ones, but they work together in such a fantastic way. It's varied enough to keep you listening over and over. It's melancholic, but in an endearing and optimistic way, it's upbeat but with a just a pinch of sadness. The best thing of all though is that it feels right instantly. It sounds like a record you've always owned and loved. Instantly familiar, touching and warming; and that really is a splendid thing.

You can pre-order the record from Weepop here . You really should, it's ace and their packaging and love is always evident in the physical release. Plus if you order one of the first 50 you can get an exclusive poster too.

You can also stream a couple of tracks from the album too (or right click and save as to download):-

Shortest Days
Posted by damian at 14:19